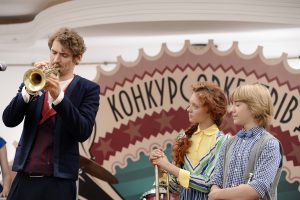 One of the main professional areas of Ukrkino is shooting of feature films. Despite the constant talk about the fact that there is «no cinema» in Ukraine, we continue to shoot and we do it on a high level. This is easily confirmed by the release of the first Ukrainian children’s musical “Trumpeter”. Of course, such a great film got a big premier and was shown almost in a hundred theaters across the country.

Making of a feature film is a large-scale process where many individual specialists and entire teams are involved. To ensure a good result everything should operate smoothly and quickly. And this requires exceptional planning skills and ability to work well with a schedule. Therefore, you can be sure that the Ukrkino company, which was involved in so large-scale projects, will keep control over the filming process and will complete the task in time.

Frequent cooperation with foreign experts and domestic film productions confirms its reputation of a high-level team. Professional skills confirmed by a continuous work with the State Agency of cinematography.