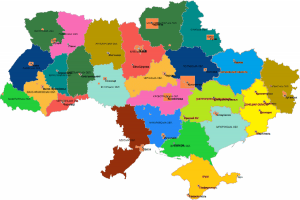 Ukraine is a big, beautiful, colorful country. At the map you can see a dozen places where you can already start creating a film. The country has many geographical privileges, so there is a place for the filming of any level of complexity — from simple to the most unusual (dangerous cliffs, jagged cliffs, fast mountain rivers, sprinkled with pine mountains, ancient villages, where people seem to live their lives away from the time and imposed rules).

In Ukraine there are two seas — the Black and Azov, numerous rivers, Crimean and Carpathian mountains, grasslands, forests, preserved ancient architecture villages, royal palaces, for filming and events of any level. The country is located in the continental climate. The average winter temperature is -3 °C in the southwest and -8 °C in the north-east. In summer the thermometer shows an average of 23 °C in the south-west and 19 °C in the north-east. Southern coast of Crimea as well as the area between the Black and Azov Seas is a warm Mediterranean climate.

How to get here
You can get in Ukraine with a direct flight or train transfers, and through land or sea routes. Citizens of the following countries can visit Ukraine without a visa for up to 90 days: USA, Canada, Japan, the EU, Switzerland, Liechtenstein, Andorra, Vatican, Iceland, Monaco, Norway, San Marino, Mongolia, Lithuania, the Commonwealth of Independent States (except Turkmenistan). In Ukraine you can find many comfortable hotels where it will be a pleasure to stay.

Movies
Only in the Crimea were shot about a hundred well-known films. “9 rota”, “Avaria — the officer’s daughter”, “Admiral”, “Assa”, “Sappho”, “Roxolana”, “Stalingrad” and it is not a full list. The main characters of the film “What Men Talk About” admired the wide Dnieper on the hilly banks of Kiev. “Chasing Two Hares”, “The Three Musketeers”, “Indy” were also taken in Kiev. Foreign filmmakers are rushing to settle with their film crew in Ukraine. “Transporter 3”, “Land of Oblivion”, “L’affaire Farewell”, “Mobius” were shot in this unique country.

Why here?
Ukraine attracts shooting teams with lovely sceneries and reasonable prices that you will not find anywhere else in Europe. Basically, all prices are standardized on the basis of common practice. Also it depends on the task. Production budgets in Ukraine remains low.

We will select suitable locations for: film, TV, photos, videos, commercials, prime, fashion shows, video presentations, auditions, rehearsals and many other valid survey. Buildings of the Soviet time, modern glass skyscrapers, houses in the bedroom communities, and old houses in western Ukraine with ancient temples and churches are just a little part of different locations where you can shoot. If some of the interiors are not possible to find, we can always construct objects and scenery on your demand.

Also here you can find people of many nationalities. Ukraine is also known for the huge number of pretty girls who can be involved in a shooting process. Also there is a big variety of cafes and restaurants with different cuisine, different kinds of clubs, casinos and bars, sports clubs, swimming pools and gyms. At your request we can select several locations and visit them on weekend.

Creative team and equipment
Artistic teams have a good professional level in Ukraine. On request we can send you a couple of recommendations from the artists on the basis of specific tasks. Thus, you can make a choice based on illustrative examples. Ukrainian rent studio has a set of HMI light and T light, American line of film cameras. One of the cranes is designed by the partner company, which is located in Ukraine, was awarded with “Oscar” and is used worldwide. Our technical team is very experienced and senior people speak English.