«The Trial: The State of Russia vs Oleg Sentsov» 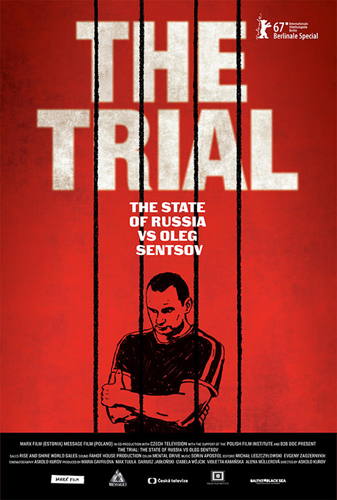 A documentary about the Ukrainian director Oleg Sentsov. After the events of Euromaydan, which swept the whole territory of Ukraine, the Russian Federation annexed the Ukrainian Crimea. Sentsov, a native of the Crimea, directly and openly opposed the occupation, for which he was arrested on 11 May 2014 by the Russian FSB and accused of preparing terrorist acts. Already on August 25, 2015 the Ukrainian director was found guilty on all charges and sentenced to 20 years in prison.

The film combines videotapes of court hearings in Oleg’s case and interviews with his friends and activists. Also in the film were a video interview with famous people in support of Sentsov, painstakingly collected around the world.

Finances for the project were collected using kraundfanding platforms, and although foreign Indiegogo failed to collect even the sixth part of the declared value, the Ukrainian “Spilnokosht” brought in the project for 10,200 UAH more than it was stated.

In summer of 2015 at the film festival “Days of Ukrainian Cinema” in Berlin, a working version of the film “OOS” (the full name “Liberate Oleg Sentsov”) was shown. Also at the end of October 2015, as part of the program “Special Events” of the 45th Kyiv International Film Festival “Molodist”, the working materials of the film were shown. The world premiere of the tape under the international title “The Trial: The State of Russia vs Oleg Sentsov” was held on February 11, 2017 at the Berlin International Film Festival, where he was presented in the section “Berlinale Special”. The Ukrainian premiere was held on March 25, 2017 at the international documentary film festival on human rights “Docudays UA”. The Ukrainian film was released by the company “ArthausTrafik” on April 6, 2017.