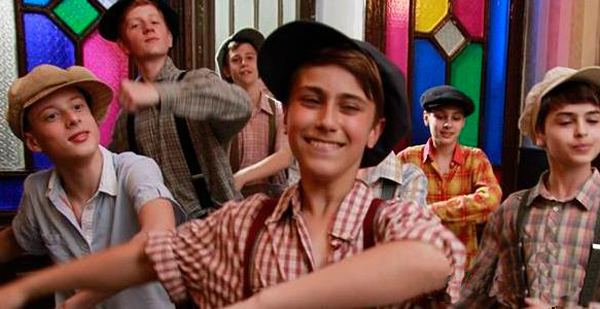 Which actor has the most complicated makeup?

The most complicated character was, perhaps, the boy antagonist, played by Denis Kapustin. How to make harmful boy from the kindest person? His make-up was very challenging especially in the scenes where he tore his tufts of hair. It was really complicated. I think it would be easier to handle this for real – but… We’ve been picking up a wig like his wonderful red hair for long time. Even this was a problem, Denis is a happy owner of an unusually rare and beautiful hair color, deep red with golden shimmer. We even needed to cut space for bald in the wig. Then I had to simulate a receding hairline and paste in hair literally one by one. Lucky me that Dan is a young actor.

Is it hard to work with children?

I love to work with children. Often, they are very professional actors. When you communicate with them as you do with adults, respect their identity, than you feel real pleasure in your workflow. Children are usually much more honest, sincere, reliable. For example it was not our first work with Lenya Shevchenko, he played the main character in the film. We have a very warm, friendly relations, we are always happy to meet each other in the workplace, but we are also good friends also outside of the set. Extraordinarily talented children played in this film and it was especially joyful to watch and to realize that strong generation of artists is growing up. They have a purpose in life, ability to work hard and what’s more important, they feel it. It is worth the effort

You are constantly working with the crew, costume designer. How you managed to reach integrity of the character?

Yes, there are difficulties. Of course the final decision is always a director’s one. Notice I’m not exaggerating. Work was extremely interesting. When I read the script for the first time, I thought it would be easy, pleasant entertainment, after all the historical films I participated in recent years. However, I failed to consider the power of thought and of our director and artist director. But honestly, I am very grateful that I had a chance to work in this film. It was very interesting and there was no time to get bored. Sometimes ideas are born right in front of the camera, like wonderful Gamkalo’s ears, that was a real surprise for my assistants… Of course there were disputes, especially with the costume designer, but professionals will always find a way out. Indeed, in our case the result is far more important than personal ambitions.

What interesting techniques you used for the filming of “Trumpeter”?

Like I already mentioned the ears of Gamkalo, it was an act of heroism for actor and makeup crew. We glued ears every day, often several times a day. Also – bald head, the task was not easy, on the one hand it was necessary to create the effect of a bald head, at the same time the viewer must believe that the guys handled it themselves, and of course time limit. In this age of the total acceleration, you always need to respect time… And of course it must be mentioned that ninety percent of actors in our film are children.

In your opinion, What is the most unusual character of the film?

The most unusual, I think the character of Gamkalo, which was masterly performed by Mr. Goryansky. First of all, because it’s a complete transformation. This is a brand new and previously unknown actor… Of course we all know and appreciate the many wonderful characters created by Mr. Goryansky before, but this is something completely new, extremely interesting and unexpected. Incredible commitment to his work, to his character. He has no obstacles. He had a lot of ideas for all departments. And the character became alive. You see, this is absolutely new identity generated by our team for the cinema lovers.