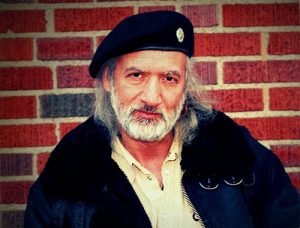 Sergei Ryabtsev – American musician of Russian origin, is best known as a member of the band Gogol Bordello, in which he plays the violin.

Sergei was born in 1958 in Gorky (now Nizhny Novgorod). In 1994 he immigrated to New York and in 2000 joined the group Gogol Bordello.

In 2005, Sergey starred in the film “And Everything was Lighted”, in 2006 in the documentary “The Pied Piper of Hutzovina”, and together with Eugene Hudz performed together with the Madonna’s hit “La Isla Bonita” in the concert “London Live Earth” July 7, 2007 at Wembley.

As part of Gogol Bordello took part in the film, directed by Madonna, “Filth and Wisdom”, which was presented at the Sundance Festival in the spring of 2008.

Sergei also plays the violin as part of 5Grand.us (the wedding ensemble), as well as in ensembles “Barynya” and “Gypsies”.

For more than 20 years she has been married withh Soviet and Ukrainian actress of theater and cinema, Honored Artist of the Ukrainian SSR (1978), Olga Mateshko.